The natural splendour of Himachal has an influence on the crafts native to the region. From the low-lying plains of Kangra to the majestic landscape of Lahaul, Himachal has a rich wealth of crafts which has found expression in exquisite wood carvings, beautiful metalware, gracious jewellery patterns, sermons in stone craft and others. Traversing the land, one may stumble upon great works of art and craftsmanship in remote village and valleys. Hidden pockets of local talent have survived the times at many places in the hills.

Age old temples in areas like Minghal, Chadrari, Bharmaur in Chamba district, Kullu, Karsog (Mandi), Sarahan (Shimla) and Kinnaur having finely chiseled wood carvings of gods, goddesses, court scenes and those from everyday life cut out on pillars, wall panels, roof ceilings, wood beams, doors and at other places. This timeless treasure is a heritage from which younger generations take inspiration to improve upon the craft.

Not spoken of much, the wood carving tradition of Himachal is also visible in household stuff like cradles, bedsteads, rolling pins, churners or wooden utensils. Pahari architecture also demonstrate excellent woodworking and attention to detail in crafting wooden houses which advocate form and functionality over a strong structural foundation.

Read Also: The Architecture of Temples in Himachal Pradesh 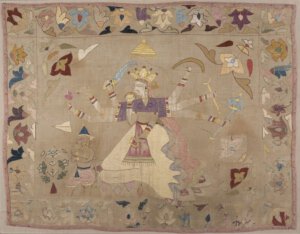 No knots are visible, and the embroidered Rumal can be viewed from both sides. It thus becomes reversible.

Himachal is known for its fine leather crafts like making of shoes, sandals and belts, especially the aesthetically made

Dear Aspirants, Himachal General Knowledge MCQs are the basic part of Himachal competitive exams. It is helpful to HPSSSB, HPPSC, and State Bank Exams. It is a series of Himachal Gk MCQs. Q1. When did […]

Hello Folks! We’ve started a new series called “Know Your District” in which we are giving all the related information one should know either to enhance their knowledge of Himachal Pradesh or preparing for any […]

Hello Folks! We’ve started a new series called “Know Your District” in which we are giving all the related information one should know either to enhance their knowledge of Himachal Pradesh or preparing for any […]