Indian Army has always been remain home to warriors . Be it external forces or internal disturbances, a natural calamity or whatever. This organisation has always proved it mettle , whenever the baton of responsibility handed over to it.

Success of any organisation, relies upon its men. Men, who are willing to serve , who are ready to sacrifice for the call of duty , men for whom their motherland always comes first. Indian army have such men. Their tales of Valor and sacrifice could be heard across the length and breadth of this nation. Its because of these men that our motherland , our freedom always remain protected. 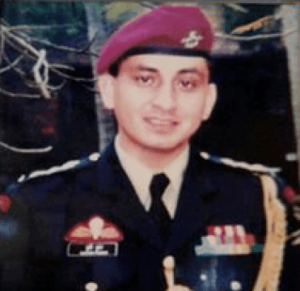 One such warrior was Major Sudhir Kumar Walia. Born on May 24, 1969, Major Walia hailed from a small village called Banuri near Palampur town in Kangra district of Himachal Pradesh. He was the son of Subedar Major Rulia Ram Ji and Smt Rajeshwari Devi Ji. Inspired from his father to join the Indian Army, Major Walia cleared the entrance for Sainik School Sujanpur Tira, his first step towards his glorious journey. Consequently, he cleared NDA in his first attempt and joined the National Defence Academy.

Major Walia passed out from Indian Military Academy in 1988 and got commissioned into 4 jat regiment. Soon after commissioning, he went to Sri Lanka on a peacekeeping mission as per the Indo-SL peace accord. On returning from peacekeeping mission, he moved to the prestigious 9 Para Commando regiment which specializes in mountain warfare.

He also served twice (6 months terms) at Siachen. In 1997, he was sent to the US for a specialized course where he topped the course. He also delivered a speech at Pentagon. Out of respect for his competence, he was called Colonel for that course.

As a Lieutenant, Maj Walia awarded Sena medal (G) on two separate occasions in 1994, for combating terrorism in Jammu and Kashmir.
Later he was deployed as Aid- de- Campe to Chief Of Army Staff General Ved Prakash Malik. When the Kargil war broke he asked for permission from COAS to join his men on the battlefield. Within ten days of his departure from Delhi, he led his team to capture Zulu top at 5200 meters in the Mushkoh valley sector. He did so without any prior acclimatization. When asked about the same, he replied, ” Sir, I am a pahadi. I don’t need any acclimatization”.

After the operation Vijay got over, he stayed in the valley to fight terrorism.

On Aug 29,1999 while on ‘search and destroy mission’ in the jungles of haprhuda of Kupwara district, he and his squad suddenly chanced upon a well-camouflaged hideout housing around 20 terrorists.

Major Walia quickly organized his team and attacked the hideout. He single-handedly killed 4 militants before he got grievously injured. He keeps on commanding his team even after grave injuries until the terrorists got eliminated. He allowed himself to be evacuated only 35 minutes after the operation ended. He was then airlifted to base hospital but succumbed to injuries en route.

I think I had written this quote for you only, “When the limits sets higher, I am the man beyond limits”.

I won’t die in an accident or die of any disease I will go down in Glory. Major Sudhir Walia , 9 Para SF

Introversion Whilst we are all sociable people, the styles of conducting our social lives are very diverse. These are the products of the way we deal with our tendencies. Every human has a certain pattern […]

Your Anxiety is lying to you!

Your Anxiety is lying to you! Ever since childhood, I have been extremely perceptive of the one emotion that easily blends in and mixes with all the others – anxiety. Anxiety has its own slow […]

Breadcrumbs I often wonder, what one must do, with bread crumbs! In one of my heart-wrenching epiphanies, it dawned upon me – that when it came to affection, I was settling for far too little. […]